I was so excited to try this new recipe (from the September 2010 issue). The recipe produces a very wet dough (not sure of the exact hydration level), but it sticks to everything. Flour the board very well, and spray, spray, spray your spatula with cooking spray. This bread uses many of the Almost No-Knead techniques, which means that there is very little work. All you have to do is wait patiently. There isn’t even a standing mixer to clean up. 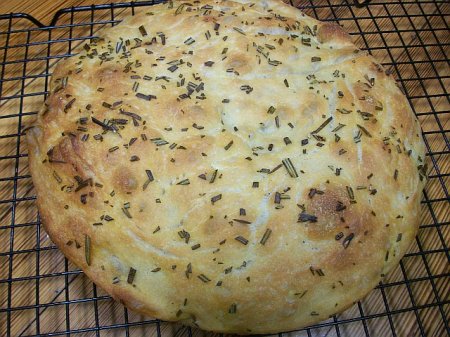 Fresh out of the oven; the best bread I've made yet.

Recipe is here. Like most of Cook’s Illustrated’s breads, this recipe uses a long fermentation process. To get the benefits of long fermentation with minimal effort, start the night before and make the biga; simply mix together a little flour, yeast and 100-degree water. Let stand on the counter for up to 24-hours.

Later, the rest of the dough is incorporated in with the biga (only one bowl to clean). Let rest for 15 minutes and sprinkle with kosher salt. Let rest for 30-minutes then fold itself over on itself 8 times, turning the bowl 90-degrees after each fold. Do this “wait 30-minutes and fold 8 times” for 1-1/2 hours, i.e. 3 repetitions. Immediately (i.e. without waiting another 30 minutes) transfer to counter and divide into two equal parts. If you have a pizza stone, preheat it to 500-degrees. Add 2 tablespoons olive oil to each of two 9-inch cake pans, then sprinkle with 1/2 teaspoons kosher salt each.  Gently shape dough and put into pan, sliding around, then flipping to coat the other side. Let rest, stretch to fill pans, sprinkle with rosemary and bake at 450-degrees for about 25 minutes.

Results: 4-1/2 starts.  I ate the first loaf 20-minutes after removing from oven, served with olive oil and balsamic vinegar on a plate for dipping. It was the best bread I’ve made yet. It is so good that unlike most stateside focaccia, it does need pizza-like toppings (but here is a recipe anyway). I had the second loaf the next day at a picnic in the Renaissance Faire, but it was disappointingly hard.

Cooked in a cake pan, the results still looks like it's made free-form.