It adds such rich flavor that for every recipe I make using vanilla, I automatically double it; one teaspoon always becomes two.  This rule has never let me down. I guess anything that costs $4 per ounce is going to taste great. While McCormick’s won CI’s March 2009 Vanilla Extract taste test, six months later Chris Kimball found a better (and cheaper) alternative; homemade. Don’t worry it’s the easiest recipe on my blog (so far). The only requirement is patience. 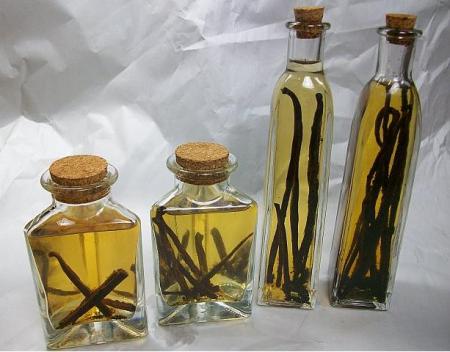 Actually, Chris Kimball has two vanilla extract recipe; one from 1993, and another from 2009 (The later heats the vodka to speed the extraction process). As I have been waiting patiently for my internet Vanilla Beans to arrive in the mail, I’ve been doing some research on the topic. Here’s what I found: most online recipes vary from Chris Kimball’s recipes in two important ways. (1) extraction time: the consensus on the internet is that it should between 2 and 6 months; not 1 week, and (2) most recipes call for 3 beans per 1-cup of vodka; not 1-1/3 beans (his 1993 recipe uses 2 beans). But even at 3 beans per cup of alcohol, that’s barely 50% of what the FDA has set a minimum standard for vanilla extract.  The FDA minimum is 0.834 oz. of bean per cup (8 ounces) of 35 percent alcohol (70 proof). And when you consider that most bakers prefer double strength extract (though Chris Kimball doesn’t like the double-strength, see How string is your Vanilla?)

The four recipe variations that I made are:

Generally, I followed the same instructions for each recipe, except where noted:

Not only do I intended to make a superior quality vanilla extract, but I also want to yield significant savings. Here’s the breakdown of costs:

Over the next six months I will followup as the vanilla extract becomes “ready” and provide ratings at the various stages for each recipe. Recipe #1 will be ready in one week.

This entry was posted on Friday, October 1st, 2010 at 3:34 am and is filed under 2010 New Recipe, Quick Tip, Things I Normally Buy. You can follow any responses to this entry through the RSS 2.0 feed. You can leave a response, or trackback from your own site.