A few weeks ago I made a pound of Crunchy Potato Wedges, and they turned out to be the best snack food that I can remember. So I made them again, but this time made the entire 1-3/4 pounds called for in the recipe. Also, I cut the slices slightly thicker; 3/8-inch, instead of 1/4-inch. They were just as delicious, and I had extra to share with my neighbors. 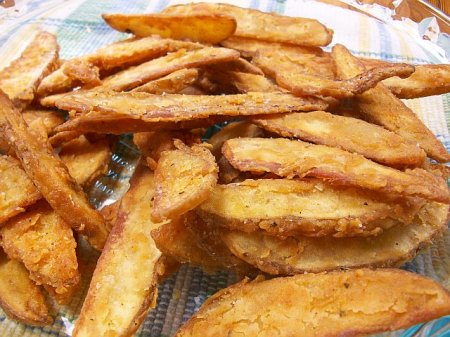 The main difference in technique was that I dredged the entire batch at once, instead of doing a handful at a time. So, the entire batch went into the dredge, then into the buttermilk, then back into the dredge. It was easier, and I think that might have been what Chris Kimball had originally intended. It also meant that I didn’t have to add any extra flour/corn starch.

This entry was posted on Saturday, November 6th, 2010 at 8:14 am and is filed under 2010 Old Favorites, 5-Star Recipes, Appetizer, Potatoes. You can follow any responses to this entry through the RSS 2.0 feed. You can leave a response, or trackback from your own site.