With weeks of constant rain seeming to transform overnight into instant summer, my party for 30 of my closest friends could have been nothing other than a barbecue.  For the kids, I cheated, and simply grilled hamburgers and hot dogs. But for the adults I tried a new recipe (from May 2011 issue of Cook’s Illustrated); Barbecued Chicken Kebabs. Of course, I tripled the recipe and cooked 6 pounds of boneless chicken thighs, which was the upper limit of the 22″ Weber grill.  The result was perhaps the best BBQ chicken I’ve ever had, though the chicken ran out before two or three of my guests ate  (a serious faux pas; I know). Overall, 4-1/2 stars, with a promise to make it again for those who only ate Arroz con Pollo.

Maybe the best BBQ chicken I've ever had.

Chris Kimball’s original recipe is here. My descriptions of how I prepare it are given below (except that I cut the measurements back down to the original 2-lbs of chicken):

Could Chris Kimball overcome the two biggest problem plaguing most whole-wheat breads: bitterness and dense texture? His new (March 2011 recipe) claims to have solved both. The trick: soak the wheat flour in milk for up-to 24 hours. Not only does this soften the wheat-flour’s hard bran (which inhibits gluten development), but it also converts some of the starch into sugar (resulting in a less-bitter loaf). The result: the texture was perfect; not too dense and not Wonder-like. Unfortunately, my goal of making a better, kid-friendly, whole-wheat sandwich bread was undone my the inclusion of wheat-germ.

Unfortunately, I discovered that the boys don’t like the wheat germ’s nutty flavor. But for an adult, it is better than most store-bought wheat bread, and without all the preservatives.

Chris Kimball’s original recipe is here. My descriptions of how I baked it over the past 2 days are given below:

Prepare the Biga (8 hours to 24 hours before baking):

Prepare the Soaker (8 hours to 24 hours before baking):

Just about every restaurant in Latin America offers a “daily special”; usually a two-course meal, heavy of the rice and beans, light in the meat department.  Usually it includes soup or salad and is about half-price when compared to ordering al la carte. For two years, that was all I ate. I’d go into a restaurant, ask for the “daily special” and they would serve me maximum calories for minimum price. Until finally, when in Arequipa in Southern Peru, my digestive system could eat no more rice, no more beans, no more fried plantains. Thus began my month of eating Peruvian Roast Chicken. It was simple, delicious and ubiquitous.

Easy as beer-can chicken, but with a nice twist.

(See my post about the America’s Test Kitchen episode here)

This is a new recipe from March 2011 issue of Cook’s Illustrated. The recipe calls for a vertical poultry roasted, but really that’s just a polite way of saying “beer can chicken”.

Chris Kimball’s original version is here. He also suggest this spicy homemade mayonnaise, which I didn’t make  My descriptions of how I cooked it it today are given below:

I have never eaten scallops before, and the new “Seafood in a Skillet” episode from season 11 of America’s Test Kitchen made me wonder why I hadn’t. Plus scallops happened to be on sale this for $7/lb. Chris Kimball made a big deal about the dry verses wet distinction, and the scallops on sale were dry (the preferred, chemical-free version). So it seemed like destiny. But after I brought them home and was ready to cook them, I realized that I bought super-mini scallops (40-to-50 per pound). They looked nothing like beauties I had seen on my TV screen. Never-the-less, I continued and they came out fine, despite their lilliputian dimensions.  3-1/2 stars. 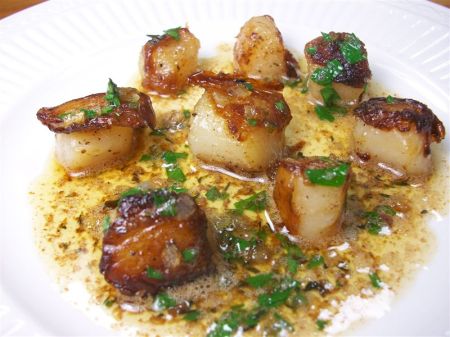 Very good with a strong flavor of the sea, but tiny.

Chris Kimball’s original version is here and the sauce recipe is here.  My descriptions of how I cooked it it today are given below:

Bread in 5-minutes per day

Before starting this blog, I had never in my life baked a loaf of bread. Now, a little over a year later, I feel as though I have become somewhat of an accomplished junior baker. Here are a few of my highlights: rosemary focaccia, rustic Italian bread, and ciabatta. I have found bread-making to be quite soothing compared to other types of cooking. Partly because there are so few ingredients, but mostly because there is so much patience involved; waiting for the yeast to hydrate, and the dough to rise, then bake, then cool.

But for all the different types of loaves I’ve made, I have never been able to find a recipe that would allow me to bake bread mid-week. The problem is that all Chis Kimball’s recipes require at least four hours for the dough to rise, bake and cool. Even though I am home by 4pm, I still cannot have bread ready until 8pm. I even asked him during one of his ATK Q&A’s, but Chris’ only advise to me was for me to make non-yeasted biscuits. As if the two were even remotely similar. 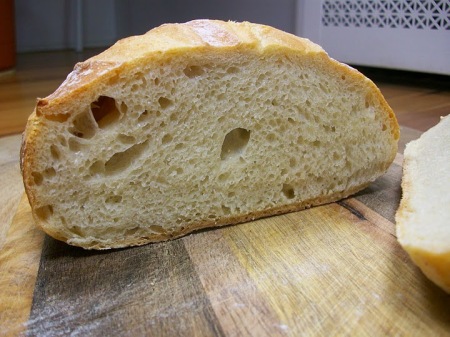 So finally I checked Artisan Bread in 5 Minutes Per Day out from the library. (another article from author) In a nutshell, the book’s premise is: Once a week you mix up the dough (not counted in the 5 minutes), then throughout the week you use the pre-mixed dough to have bread ready in “just” 2 hours per day. The 5-minutes counts only active preparation; in all honesty, kind of an overly optimistic way to count the time. But the bottom-line is that this is the only way (so far) that I can accomplish my goal of having weekday bread ready by 6-pm.

At first I tried the basic recipe (described here). The recipe is good and simple. However, after eight or so loaves I wanted to move onto something a little more interesting. The past few batches I’ve been making the European Peasant Bread; the basic techniques are the same, and the recipe is below.

First attempt had a dense crumb. The dough was too dry.

Last night, my parents and I sought a restaurant that offered traditional French dishes. We have been eating fantastically, but most restaurants aren’t selling traditional dishes like Coq au Vin or Daube Provencal. Just within my parents two block walking limit, I found Chez Pierrot on Rue Amelie. Fortunately we went early (7PM), because the tiny 12-table restaurant filled up quickly and had to turned away many potential clients.

Stew was silky smooth, but beef was only average.

I opted for the Boeuf Bourguignon Maison (Homemade Beef Burgundy). After watching the movie Julie and Julia with my son/junior chef, I made Boeuf Bourguignon about a year ago.  Last night’s stew was much silkier, and smelled heavenly. But some pieces of the beef were tough. Other pieces had too much gristle, which probably would have cooked down has they cooked it for 6 hours. None of the beef was as tender as Chris Kimball’s recipe, which was 10 hours in the making. 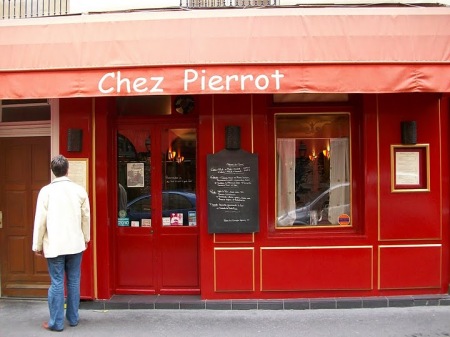 But Chez Pierrot’s was also much simpler; no boiler onions or mushrooms. Also it was served in a simple bowl, rather than served over buttered egg noodles or mashed or boiled potatoes.The simplicity was delicious, but very different from the Boeuf Bourguignon from Julia Child or Chris Kimball.

I rate this meal 4-stars, mostly because of the issues with the beef. The dish cost 17-euros.