Some may remember my $18 Onion soup disaster from a few months ago; summarized as “burnt onions and soggy bread”.  Today, I am pleased to report a happy ending to my 9-month quest to rival the onion soup that you can get at just every any Parisian Bistro. In the end, it took only two tiny changes to transform tragedy into triumph. Lesson #1. Reduce the oven temperature to 375-degrees (without convection). Lesson #2. Before placing toasted baguette slice on top of soup, sprinkle and melt a little cheese to insulate the bread and control its sogginess. 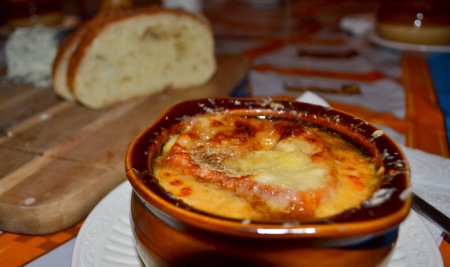 Best onion soup I’ve had outside of Paris

While Chris Kimball has four recipes, I made his Best French Onion Soup; which has high complements from other bloggers (here and here).  The key is not over bake the onions in the oven, which will ensure that you can triple deglaze them on the stove-top. Because of the long cooking time, don’t use any sweeter types of onion; just plain yellow onions.  Chris Kimball also has a quicker version of this recipe that will be ready two hours earlier; replacing the 2-1/2 hours in the oven with 25 minutes in the microwave. This could be an excellent alternative in case I need my oven for the main course.

Chris Kimball’s original recipe is here.  The descriptions of how I prepared the soup today are given below:

Best onion soup I’ve had outside of Paris

This entry was posted on Tuesday, January 31st, 2012 at 8:42 am and is filed under 2012 Recipe, 5-Star Recipes, Appetizer, Side. You can follow any responses to this entry through the RSS 2.0 feed. You can leave a response, or trackback from your own site.