This may be my first recipe from the Philippines. The recipe calls for coconut milk means, which I knew meant that my family’s opinion would be split.  I love coconut, and give this recipe 4-stars. My coconut-hating son gave his sauce-less chicken just 2-stars. But if you like coconut, the recipe doesn’t require a lot of labor and can be made on a weeknight. 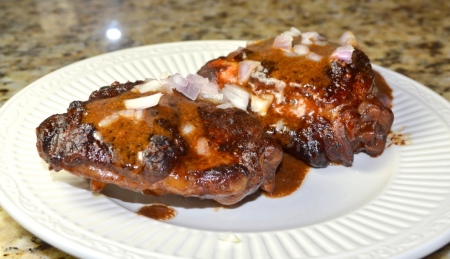 The odd thing about this recipe is that the chicken starts skin-side down in a cold skillet. According to Chris Kimball, as the skillet gradually heats up the fat under the skin will begin to melt allowing the chicken to brown. In fact, the chicken browned very well and I discarded quite a bit of fat. So far so good.

But the recipe had a serious flaw. While I followed all the cooking temperatures and times exactly, in the end the thighs registered only 140-degrees. 10 minutes longer and they were only up to 145-degrees. Another 5 minutes and they were still at 145-degrees. After 50 minutes on the stove-top I had to finish under the broiler until the chicken registered 175-degrees. Why? I have two possible explanations: (1) the burner was too low, or (2) because I used only 6 thighs and the recipe called for 8, more of the thighs might have been covered by sauce. The higher level of the liquid would have transferred more heat to the chicken.

Chris Kimball’s original recipe is here.  The descriptions of how I prepared the soup today are given below:

This entry was posted on Monday, March 26th, 2012 at 7:15 am and is filed under 2012 Recipe, Chicken. You can follow any responses to this entry through the RSS 2.0 feed. You can leave a response, or trackback from your own site.