OK, this has nothing to do with food. As a father, the moments when I am most proud of my two sons are usually private. The first time my son beat me outright in Chess (I always play full speed). When my son bring home a 100% on a test for a subject he’s been struggling with. Watching my older son’s amazing 7th Grade Concert. But last night was one of the rare nights when my private pride spilled over into public accolades, as my youngest son Nico stood before 500 fellow students and parents to receive a trophy that measured half his height. 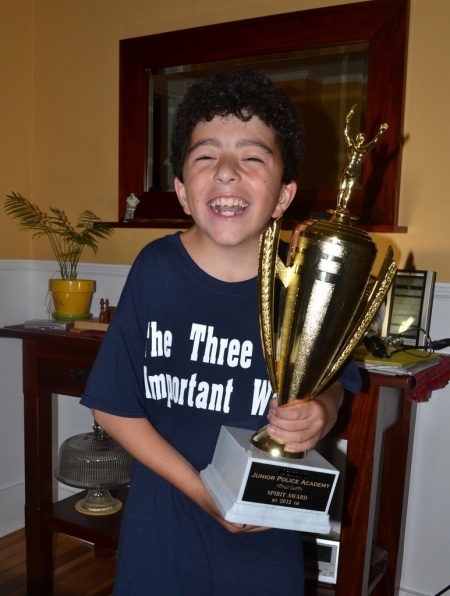 Nico can not do the most push-up nor is he the fastest runner. But the Spirit award was given not for outright achievement, but for intestinal fortitude and the strongest heart. The award reflected that Nico never gave up mentally, even when his muscles were not strong enough to give more. He learned everything he could. He gave 100% of his effort everyday. Knowing my son; this is his highest praise, a reflection of his success with the thing he has most struggle with. There are no words to describe my intense pride as I watch Nico stand up in front of so many people to receive this particular award, and at this particular, tumultuous time. There are no words.

I am lucky to live in a town when the Police Department runs a 2-week summer camp for kids going into 6th grade. Essentially it’s a mini boot camp, where they show the kids: CSI, high-speed driving, K9, helicopters, etc. More importantly, the camp instills responsibility in a way that is difficult for a loving father to emulate. They put into action the three most important words: Respect, Discipline and Honesty. My only “job” was to make sure he has clean clothes, and to get him there on-time. Nico had to make and pack his lunch, pack his own supplies, and make sure he wore the right color shirt. One day Nico accidentally wore his dirty, white shirt, instead of his clean blue one. Excuses were not important. My heart melted when he apologized because he made me late for work, having to go home and get his blue shirt. He took responsibility for his mistake and did his push-ups without complaint.

Instilling in my son what is essential in a responsible citizen

Enormous trophy half the size of my son.

This entry was posted on Saturday, July 21st, 2012 at 8:25 am and is filed under 2012 Recipe. You can follow any responses to this entry through the RSS 2.0 feed. You can leave a response, or trackback from your own site.

10 Responses to Respect, Discipline and Honesty