I love hash browns, and at one point subsisted on them for more than a month. But I had never heard of Potato Latkes before I made this recipe; I think may be the same thing as Potato Pancakes. Whatever they’re called, the only real difference is that they use egg as a binder and include a 1/2 cup of grated onion. The Latkes themselves are delicious, 4-stars. Unfortunately, I was very unpleasantly surprised at the huge mess they made in my kitchen. It’s like Chris Kimball purposefully tried to use the greatest number of bowls and baking sheets possible; definitely not worth the cleanup.

Delicious, but a big mess

Chris Kimball’s version of this recipe is here. The descriptions of how I prepared the recipe today are given below: 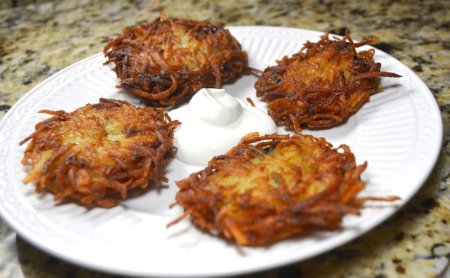