I unsuccessfully attempted this “foolproof” recipe once before; the chicken overcooked and became dry while I waited for the crumbs to brown. This time I pre-browned the crumbs to the desired doneness before breading the chicken. The darker breading added better flavor, and the chicken remained moist. As an insurance policy, I added a Parmesan-Dijon sauce, which added even more flavor. One minor problem, I used the regular deli ham my son has been using for his lunches. The ham slices were too thin and sprung a leak; some of the Swiss cheese oozed out of both breasts. Overall, the meal turned out fantastic; 4-1/2 stars. Much better than last time, because of the darker bread crumbs. 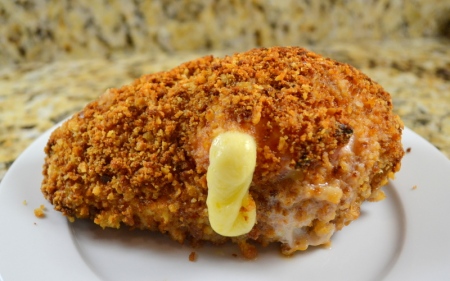 Also, I cut the recipe in half because I only needed to feed my two sons.

Chris Kimball’s original recipe is here.  The descriptions of how I prepared it today are given below:

This entry was posted on Tuesday, October 1st, 2013 at 5:18 pm and is filed under 2013 Recipe, Chicken. You can follow any responses to this entry through the RSS 2.0 feed. You can leave a response, or trackback from your own site.