Sesame-Crusted Salmon with Lime and Coriander

I enjoy fish (but more importantly my girlfriend absolutely loves it), so was happy when this recipe yielded a complete success. The recipe was a refreshingly new way to cook salmon, and didn’t simply rely on sauce to make it interesting. Chris Kimball’s gives a quick 15-minute brine to season the fish and ensure that it doesn’t dry out during cooking. But the recipe succeeds because the ginger, lime and coriander make the flavors much brighter, complimenting the subtle flavors of the sesame seeds and salmon. The tahini is used as “glue” to attached the sesame seeds to the fish. 4-1/2 stars. 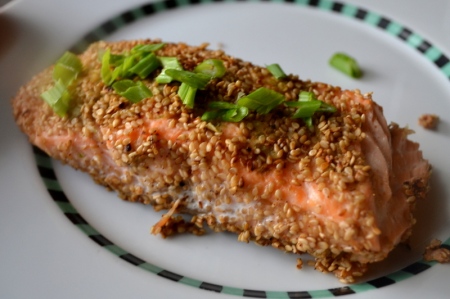 Salmon was flavorful and perfectly cooked

Here is the original Cook’s Illustrated link to for this recipe. The descriptions of how I prepared the recipe today is as follows:

Enjoying seafood (not this recipe) with my girlfriend