When this recipe first came out over a year ago, I really wanted to make it, but the recipe is so disjointed on their website (you need to follow three separate recipes) that I eventually became distracted with easier-to-follow recipes. Until recently, I saw the ATK episode that made it look so easy; so I gave it a try. I must have been a lot of “trick photography”, because the recipe was a lot of work and made a huge mess in my kitchen. I did have a problem with the lobsters becoming water-logged (discussed below); but overall, as you would expect, the lobster rolls were delicious. Just prepare yourself for a fair amount of messy work. 4-stars.

While I followed the cooking instructions exactly, my lobsters became waterlogged. While there are a couple of theories about why my lobster became water-logged: (1) allowing lobster to cook too long, (2) boiling lobster (vs. steaming them). Chris Kimball is convinced that it is the molting cycle of the lobster that determines whether or not the meat will be firm and dense or soft and water-logged. He gives a lengthy explanation here. Chris Kimball’s bottom line is this: lobster in Spring until early Summer and best. Late Summer lobsters are still growing into their softer-shells, whereas Spring lobsters are packed tightly into their hard, pre-molted shells. You may need to increase the size of your Late Summer lobsters by 1/4-pound to compensate. In reality, the molting cycle is a little more complex than Chris Kimball describes.

Chris Kimball’s original recipe is here, here and here. The descriptions of how I cooked it today (including all three of Chris Kimball’s recipes) are given below: 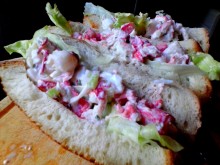