One of my all-time favorite recipes is Coq au Vin, with its deep, rich sauce; almost a demi-glace. Today’s recipe took an hour less than a standard, red-wine-based Coq au Vin, but I was skeptical when Chris Kimball lightened up its hallmark sauce using a white Riesling. The recipe resulted in great, well-balanced flavor. However, the sauce was a little too subtle; not bold or luxurious. Also, there was not enough chicken in the final dish; by the time I trimmed down my 5-lb whole chicken it was closer to 2-1/2 lbs of bone-in chicken. Given that the two recipes cost the same to make, I would choose the original Coq au Vin (even with the extra hour of cooking time). Overall, 4-stars; today’s recipe makes for an enjoyable meal. 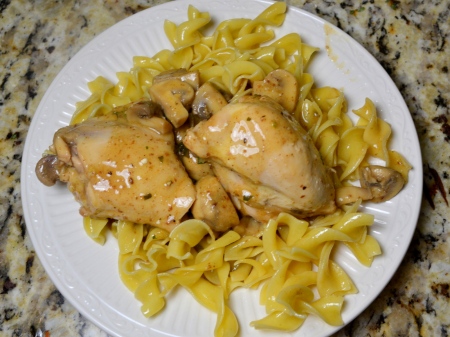 The recipe calls for “dry Riesling”. Unfortunately, I discovered that the term “dry Riesling” did not help me to select the right bottle in my local wine shop.  I ended up selecting my bottle because it had 11.5% alcohol. You should go wine shopping armed with the following advice from Chris Kimball on how to select the proper bottle:

Chris Kimball’s original recipe is here.  My descriptions of how I prepare it today are given below:

This entry was posted on Saturday, May 2nd, 2015 at 5:58 am and is filed under 2015 Recipe, Chicken. You can follow any responses to this entry through the RSS 2.0 feed. You can leave a response, or trackback from your own site.