Allegedly the third biggest canyon in the world

Our first stop in South Africa was in the north-east where the Great Escarpment drops away into the Lowveld; forming the third largest canyon in the world (according to the South Africans, behind the 4,400 feet drop of the Grand Canyon, and Fish River Canyon). The Canyon’s impressive drop of 2,400 feet happens quickly; one minute we are at river level then a few miles down the road the river lies far below.

The Great Escarpment is where Madagascar and Antarctica broke away from Africa about 200 million years ago. Another famous feature is God’s Window; just south of Blyde River Canyon, along the same panoramic route. If anyone remembers the 80’s comedy “The Gods Must Be Crazy”; this is where the story’s hero comes to throw the Coke bottle off the end of the world.

There are many waterfalls and other geological features in the area. We visited Sudwala caves; while not the biggest caves we’ve seen; they claim to be the oldest; forming over the course of 240 million years. They have been habited by our ancestors for about 1.8 million years. 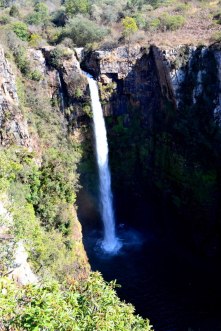 We drove the Panoramic route in one day; from Sabie in the south to Hoedspruit in the north.  We ended up sleeping in the Bushriver Lodge, which turned out to be my favorite hotel in Africa. We were able to walk freely in their game reserve (no big cats or elephants), and enjoyed the beautiful deck overlooking the Oilifants river (we saw crocs, but no hippos).

While walking near our lodge

TRAVEL WARNING WITH MINORS: Unfortunately, South Africa has very recently (June 2015) changed the rules when traveling with minors under 18 years old. You are required to travel with original, unabridged birth certificate. Because I am divorced the rules also require me to travel with the a court order proving that I have full custody (Because I only have shared custody, Immigration was not supposed to let me travel). And because my custody order is part of my divorce decree; the new rules require me to travel with a complete inventory of all my assets and accounts. These new laws seem like the were drafted by kidnappers and extortionist.

This entry was posted on Thursday, September 3rd, 2015 at 6:53 am and is filed under 2015 Recipe, Travel. You can follow any responses to this entry through the RSS 2.0 feed. You can leave a response, or trackback from your own site.