While necessity has dictated that I make them on occasion, I have never loved biscuits. My heart lies with the wonderful flavor of yeasted rolls. Of course, chemical leaveners such as baking soda/baking powder have an advantage over yeast in that they are quick. But today’s biscuits take two full hours from start-to-finish; an hour of which is related to chilling the butter/dough to allow for the nice definition of the layers. As biscuits go; these are better than most. The flaky layers lighten the crumb, and they have nice buttery flavor. But biscuits are inherently dry, and they would have been better if I served them with a main course with gravy. 4-1/2 stars for the recipe; ignoring the flaws in my execution. 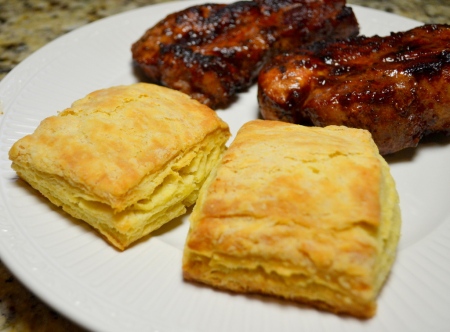 A few of my errors reduced their flakiness

I have made these biscuits on two different occasions (the pictures are from the second time that I made them). Because it was the second time, I wasn’t reading the recipe as closely and made to errors in execution that affected their flakiness and made them denser than the first time I made them. Still, even at their best they cannot compete with the texture produced by yeast.

Chris Kimball’s original recipe for is here. My descriptions of how I prepared it today are given below: