I once biked my way through Mexico from North to South, and it seemed that I ate tacos for breakfast, lunch and dinner. Fish taco, beef tacos, bean tacos, tripe tacos, even iguana tacos (which taste like chicken).  But it seemed to me that the favorite taco amongst Mexicans were Pork Tacos al Pastor (Shepard-style tacos). The marinated pork is arranged on a spit, then cooked on a vertical rotisserie (referred to as a trompo). When the outside layer has finished browning it is shaved away into tacos, exposing a new layer which then slowly browns for future customers. The system results in tacos that are perfectly cooked to satisfy a steady flow of customers over time. 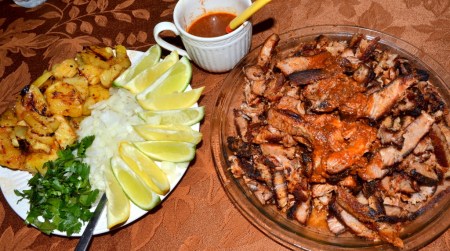 The braising and barbecuing technique in this recipe worked perfectly at recreating the overall flavors of real Mexican Tacos al Pastor; without a trompo. I invited my Mexican friends to dinner who gave these tacos glowing reviews. The only complaint was that they lacked heat, which they rectified with a little Tabasco.  I would prefer to find some more authentically Mexican source of heat. My Mexican friend promised to give me a few hints, which I will post then next time I make them. 4 stars, but they could be 4-1/2 stars with a little more heat.

Chris Kimball’s original recipe is here. My descriptions of how I prepare it are given below: 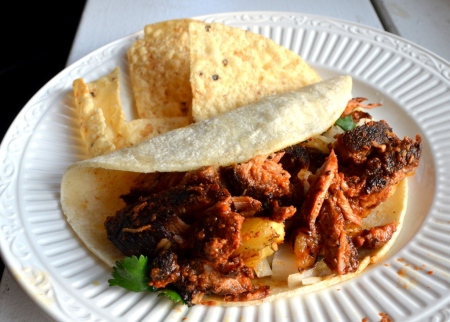 I accidentally over-stuffed my tacos

This entry was posted on Friday, April 20th, 2012 at 7:58 am and is filed under 2012 Recipe, Pork. You can follow any responses to this entry through the RSS 2.0 feed. You can leave a response, or trackback from your own site.